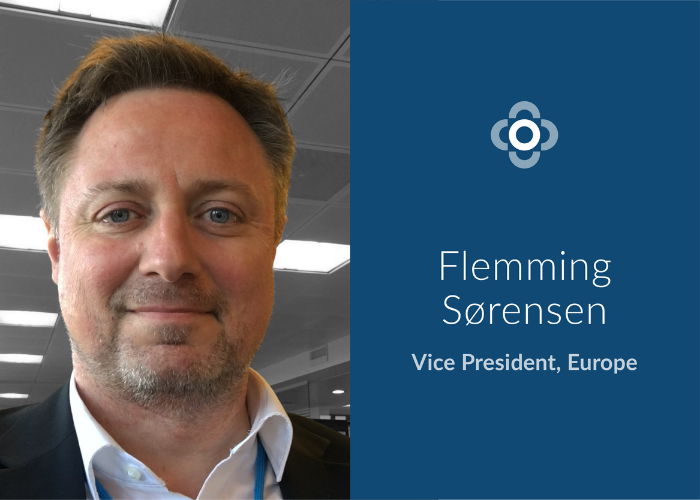 It takes courage to move your family to a country where you don't speak the language. Even more so in the middle of a pandemic. But that's not stopping Flemming Sørensen, LevelTen's new Vice President of Europe, who recently relocated from Copenhagen to our new European headquarters in Madrid. In his new role, Flemming will be responsible for expanding LevelTen's presence in Europe, helping more renewable energy buyers enter into power purchase agreements that meet their needs in terms of value, risk and environmental impact.It's not the first time Flemming has crossed borders for an exciting opportunity. Over the last 20 years, his roles have included project development at Ørsted, energy sourcing at Novo Nordisk, and portfolio management at Energi Danmark, which means he understands LevelTen's business from all sides: selling, buying and investing in renewable energy. His path to the energy industry began in Kazakhstan, moments before the economic crash of 2008.

Flemming started his career as an equity trader in Denmark and Sweden, executing trades for domestic and foreign institutional investors in European equity markets. In early 2008 he was approached to lead the trading team at a bank in Kazakhstan, which - at the time - was experiencing a flurry of foreign capital investment. Unfortunately, shortly after making the move, the financial crisis hit and foreign investment quickly dried up, leaving Flemming with little opportunity.

But it wasn't all bad. While there, Flemming met his future wife, Saulé. "I went to Kazakhstan seeking fame and fortune: I didn't find that, but I did find an amazing woman," he said.

Diving into the Power Market at Energy Danmark

With financial markets crashing all around him, Flemming decided to move back to Denmark, where he found a role as a portfolio manager for Energi Danmark, one of the leading energy trading groups in Northern Europe. In this role he set up individual purchasing/trading strategies for Nordic industrial clients, helping them manage their risk in the European power markets.This was his first foray into the energy industry and required him to have his finger on the pulse of power prices. "I brought my experience from working within global financial markets, but I needed to learn how obscure factors such as weather forecasts, wind speeds, hydrology, infrastructure network and associated bottlenecks, just to name a few, would influence European power prices. So, I spent the first many months on the trading desk, observing how different factors impacted day-ahead as well as forward market curves, and how energy prices transformed over days, weeks, months, and years. You get a true understanding of what various market inputs mean when you have your eyes on the screen watching it every day," said Flemming.

Innovating Under a Deadline at Novo Nordisk

In 2014, after five years at Energy Danmark, Flemming took on a new challenge at Novo Nordisk, where he was responsible for implementing the healthcare company's ambitious RE100 strategy. The company, which one of the largest employers in Denmark, had committed to being 100% renewable by 2020, an aggressive goal that meant that Flemming was under a tight deadline to source clean energy for facilities spanning the globe.

Under his leadership, Novo Nordisk completed many innovative projects, including two significant thermal projects. The first was the conversion of a coal-fired power plant to biomass that supplied Novo Nordisk's largest manufacturing site with steam and heat. Another project involved turning the waste stream of the company's fermentation processes into bionatural gas. These projects effectively decarbonized Novo Nordisk's thermal footprint in Denmark.

A large part of Flemming's role involved sourcing renewable energy, including entering into power purchase agreements with wind and solar projects. When the company decided to invest $2 billion USD into a new API manufacturing plant in North Carolina, Flemming oversaw a tax equity investment with a solar project that would cover Novo Nordisk's growing energy use in the United States. "At Novo Nordisk, I loved the thrill of building something new and working on deals across the globe," said Flemming.

Thanks to these innovative projects, Novo Nordisk reached its goal of becoming 100% renewable ahead of its 2020 deadline.

Putting the Wind in Ørsted's Sails

With deep experience as a corporate renewable energy buyer, Flemming found his next opportunity managing power purchase agreements for Ørsted's offshore wind portfolio. The company is at the forefront of offshore wind development, and needed to find off-takers for the vast amount of power coming online in Europe. Working at Ørsted gave Flemming a deep understanding of the needs of renewable energy project developers.

When Flemming got a call from LevelTen, he immediately recognized the opportunity. "Having been a corporate buyer, I felt how annoying and difficult it is to procure renewable energy, especially in different countries, each with their own market dynamics," said Flemming. "It was exciting to see that LevelTen was making the experience dramatically better and enabling buyers to make better decisions."

As VP of Europe, Flemming will once again be placed in a role where innovation is key. "There's a lot of momentum building for renewable PPAs in Europe, and LevelTen is in a position to open the market to many more buyers. I see so many opportunities to make this process easier and look forward to bringing all that LevelTen has to offer to Europe."

Flemming's wife and seven-year-old twins will be joining him on this journey, and recently relocated to Madrid. "It's going to be a great family adventure; our children (and hopefully also their parents) will learn to speak Spanish and grow up in a multicultural, international environment," said Flemming. "And I hear great things about Spanish wine."

Want to check out what LevelTen has to offer in Europe? Contact us to get a free consultation and credentials to the Marketplace, where European projects are now available to search.