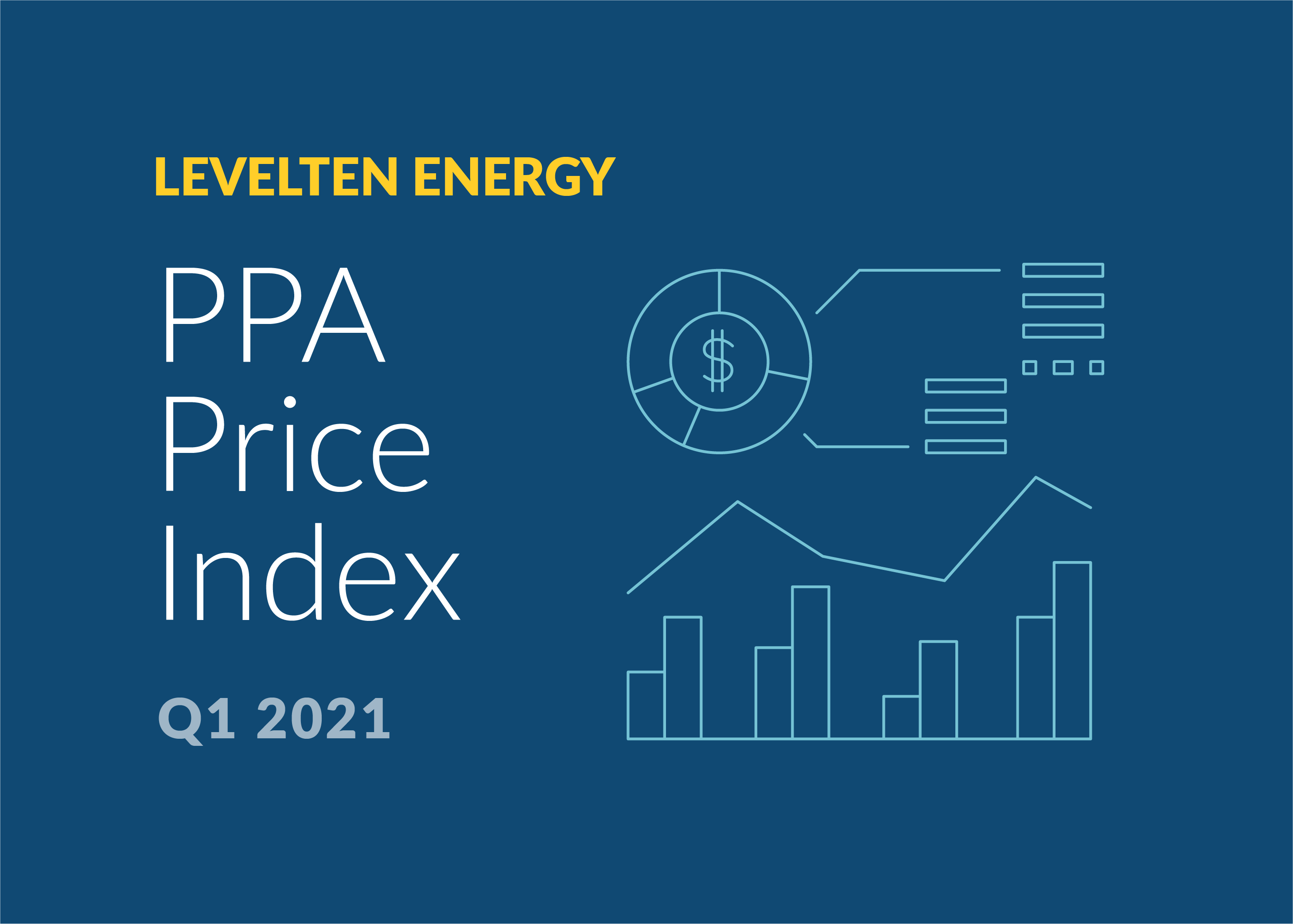 Today, LevelTen Energy released its Q1 2021 PPA Price Index reports for North America and Europe, delivering the industry’s most comprehensive analysis of actual power purchase agreement (PPA) price offers in 17 renewable energy markets across the globe. Here are a few highlights from each; fill out the forms below to download the complete reports.

After four quarters of strong rising trends in both the Wind and Solar P25 (25th Percentile) Indices, wind prices finally broke their rising streak and dropped by 6.2% in Q1 2021. “For the past few years, wind prices as a whole have been rising, and they increased significantly in 2020. The extension of renewable Production Tax Credits (PTC) in December 2020 appears to have tapered that increase. Time will tell if the continuation of such policies will create a stabilizing effect on North American wind prices,” said Rob Collier, Vice President of Developer Services, LevelTen Energy.

Meanwhile, solar prices maintained their upward trajectory; P25 solar prices in North America increased 2.6% quarter over quarter. On a year-over-year basis, renewable PPA prices for both wind and solar in North America have risen significantly. The technology-blended P25 Index, a combination of all solar and wind offers available on the LevelTen Marketplace, rose 11.5% when compared to Q1 2020. As covered in our Q4 2020 Price Index report, U.S. renewable energy markets displayed resilience in the face of the economic shocks of 2020, and have become more competitive as corporate PPA demand continues to increase, leading to rising PPA prices.

Corporate preferences continue to play an even bigger role in shaping the trajectory of the renewable industry. In LevelTen’s survey of developers with projects on the LevelTen Marketplace, 68% of respondents answered “yes” when asked if their organization was working to improve its practices and tracking related to social and environmental justice as a result of PPA offtaker preferences. “We’re seeing a rapid rise in corporate offtakers incorporating environmental and social justice preferences — and even requirements — into their RFP processes. The majority of developers are beginning to rise to this challenge and looking into their internal practices, and those of their supply chain partners, to increase transparency and promote equity throughout various aspects of project development,” said Rob Collier,  Vice President of Developer Relations, LevelTen Energy.

In Q1 2021, European renewable PPA prices displayed remarkable stability. The Blended P25 Index for offers on LevelTen’s European Marketplace increased by only 0.1% quarter over quarter, with P25 solar prices increasing by 0.3%, and P25 wind prices dropping by 0.1% in Q1 2021. As a whole, European PPA prices are remaining quite level.

Spain continues to be a red-hot solar market, as continued competition from Spanish developers reduced Spanish P25 solar prices by 2.6% in Q1. After a highly-anticipated auction held by the Spanish government in late January, it appears that the solar industry in Spain has only become more competitive as prices continue to decrease and corporate interest in Spanish solar PPAs remains strong. "I do not believe that the recent auction prices will set a new near-term benchmark for PPA prices in Spain. However it is clear that Spain remains both an attractive and competitive market with a huge solar development pipeline, so I would expect PPA prices to continue to decline slightly going forward," said Flemming Sørensen, Vice President of Europe, LevelTen Energy.

For the third consecutive quarter, Italy had the highest percentage of European offers on theLevelTen Marketplace, as the thriving Italian solar industry continues to fuel an influx of projects. In Q1 2021, Italian offers comprised 31.3% of offers, while Spain remained the market with the second-highest number of offers for yet another quarter, making up 24.8% of all offers. The UK surpassed Germany to take third place, with an increase in offers likely caused in part by an upcoming UK government auction slated to take place later this year, spurring development.